12 April 2021, Rome – European Space Agency (ESA) astronaut Thomas Pesquet was named Food and Agriculture Organization (FAO) Goodwill Ambassador today, the International Day of Human Space Flight. Pesquet will help FAO raise awareness about the importance of transforming the world’s agri-food systems, making them more resilient, inclusive, efficient and sustainable to overcome the challenges of persisting and growing hunger, and preserving the planet’s environment and biodiversity. With hunger on the rise - almost 690 million people go hungry and COVID-19 could push up to 132 million more into hunger (latest estimates), business as usual is no longer an option, the FAO Director-General QU Dongyu noted while conferring the title to Pesquet. “We need the support of every individual. We need science. And we need action, most of all,” the Director-General added. “Thomas Pesquet brings us a unique perspective, from the vantage point of space.” “Over the years, Thomas has worked in support of the FAO to help raise awareness of the impact of climate change on agriculture; of the importance of access to nutritious foods; and of how critical it is for us to manage our natural resources wisely, reducing food loss and waste. I am delighted that today you are committing to working even more closely with us, in your new capacity as an FAO Goodwill Ambassador,” the FAO Director-General stated. “I am very proud to accept the nomination as an FAO Goodwill Ambassador. As I’m preparing for my coming mission, I’m feeling closer than ever to the work of FAO. I want to bring awareness to the fight against hunger,” said Thomas Pesquet, whose second mission to the International Space Station, called Alpha, is scheduled to be launched on 22 April and to last for 6 months. Pesquet will be the first ESA astronaut to fly on a SpaceX Crew Dragon being launched on a Falcon 9 rocket from Florida, USA. Pesquet said his first spaceflight had drastically changed his perception about the challenges the world was facing as he became more aware of the “parallel between our home planet and our spaceship.” “After all, Earth is also a spaceship, flying through space with limited resources. The problems are the same – a hostile environment that you have to deal with, limited resources that you have to share and there is a need to get along with crew members and work together to achieve your goals,” said Pesquet. “I was also the witness of the effects of climate change on our planet and the consequences of human action, so I tried to document all these from space and advocate for more respect for the environment.” The French ESA astronaut has been an advocate for action on climate change and used his experience of 196 consecutive days on board the International Space Station in 2016 and 2017 to highlight the need for unity on our “one Earth”. His work as FAO Goodwill Ambassador will include promoting awareness of FAO’s science-based efforts to address agri-food systems transformation, food waste, food insecurity and malnutrition, as well as drawing attention to how people’s daily food choices have implications on their wellbeing and the planet’s health. “Astronauts are our best ambassadors to talk about not only the exploration part but also how satellites and space applications can benefit our planet Earth,” said ESA Director General, Josef Aschbacher. “ESA is supporting the FAO in its fight for sustainable agriculture and food security…Many variables to monitor climate change are only visible from space and ESA is working to make monitoring from space even more precise, and local to ensure countries can then enforce the Paris Agreement in the most efficient way.” FAO believes in the potential and contribution of space science and technology to end hunger, and the use of science to improve food- and agriculture-related policies, engage consumers, and advocate for sustainable lifestyles. For example, in collaboration with ESA, FAO helps countries use satellite data to guide their food and agriculture policies. Thomas Pesquet was formally designated as FAO Goodwill Ambassador during an online event that also saw the participation of the Ambassador of France to FAO, Céline Jurgensen; the Ambassador of the Russian Federation to FAO, Victor Vasiliev; and Acting Deputy Chief of Mission of the United States of America, Jodi Breisler. About the International Day of Human Space Flight In 2011, the UN declared 12 April as the International Day of Human Space Flight “to celebrate each year at the international level the beginning of the space era for mankind, reaffirming the important contribution of space science and technology in achieving sustainable development goals and increasing the well-being of States and peoples, as well as ensuring the realization of their aspiration to maintain outer space for peaceful purposes.” 12 April 1961 was the date of the first human space flight, carried out by Yuri Gagarin, 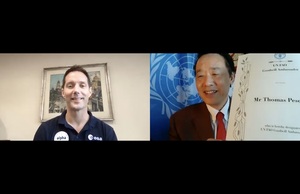 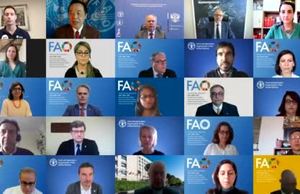