Food and Agriculture Organization of the United Nations releases the 2020 Global Forest Resources Assessment (FRA). FRA is the only comprehensive and authoritative source of global forest resources information. The latest update was published in 2015 and the 2020 edition contains original data and metadata covering 60 forest-related variable categories. "The Global Forest Resources Assessment is the most comprehensive assessment of forest resources, their management and uses that exists." Explains Anssi Pekkarinen, FAO Senior Forestry Officer who adds "it is the reference also that is being used to support many international processes". Among the new findings of 2020 Global Forest Resources Assessment, Anssi Pekkarinen, highlights that "we are still losing 4.7 million hectares per forest. The most of that loss happens in Sub-Saharan Africa and in South America, but also in South Eastern Asia we still lose about 1 million hectares of forest every year". Some of the positive findings are that the area of forest found within legal established protected areas is increasing and now has reached 18 per cent. Also the area of forest under the sustainable management plans is increasing “now more than half of the world forest area is covered by these plans.” says Pekkarinen. The Key Findings of FRA 2020 are: • The world has a total forest area of 4.06 billion hectares, which is about 31 percent of the total land area. • The global forest area continues to decrease, and the world has lost 178 million hectares of forest since 1990, an area about the size of Libya. However, the rate of net forest loss decreased substantially over the period 1990–2020 due to a reduction in deforestation in some countries, plus increases in forest area in others through afforestation and the natural expansion of forests. • Africa has the largest annual rate of net forest loss in 2010–2020, at 3.9 million hectares, followed by South America, at 2.6 million hectares. The highest net gain of forest area in 2010–2020 was found in Asia. • Since 1990 an estimated 420 million ha of forest has been lost worldwide through deforestation, conversion of forest to other land use such as agriculture. However, the rate of forest loss has declined substantially. In the most recent five-year period (2015–2020), the annual rate of deforestation was estimated at 10 million hectares, down from 12 million hectares in 2010–2015 and 16 million hectares in 1990-2000. • The world still has at least 1.11 billion ha of primary forest. • In addition to the reduced rate of net forest loss and deforestation, FRA 2020 reported also other positive findings. The area of forest in protected areas has increased by 191 million ha since 1990, and has now reached an estimated 726 million ha (18 percent of the total forest area of reporting countries). In addition, the area of forest under management plans is increasing in all regions – globally, it has increased by 233 million ha since 2000, reaching 2.05 billion hectares (54 percent of the total forest area of the reporting countries) in 2020. 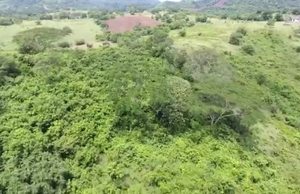