United Nations Food and Agriculture Organization (FAO) warned that Ethiopia, Kenya and Somalia are dealing with desert locust swarms of “unprecedented size and destructive potential” that could spill over into more countries in East Africa. Destroying hundreds of thousands of acres of crops, the outbreak is impacting the region’s food insecurity. Rosanne Marchesich, Emergency response and resilience team leader at FAO said, “the desert locust invasion, what we know is that, it’s the worst that we’ve seen in Ethiopia and in Somalia in 25 years and the worst that we’ve seen in Kenya in over 70 years.” She added, “the extent of the locust situation varies from country to country but in the Horn of Africa, it is current in Ethiopia, Kenya and in Somalia. We know that in Ethiopia there is about four hundred and thirty square kilometers that have been affected so far. And, there has been extensive crop damage in those areas. As it moves to other parts of the country, we expect that the impact that it will have on food security and agricultural livelihoods – both for the farmers and the pastoralists – can be significant.” The UN agency urged for a collective campaign to deal with the crisis, concerned over the risk that the swarms spill over into more countries in East Africa. Marchesich said, “there is a risk for its spreading. The countries that are on watch, the most significant countries on watch at this point are Uganda and South Sudan. Uganda has not had to deal with a locust infestation since the 60’s so there is concern about the ability for experts on the ground to be able to deal with it without external support. And in a country like South Sudan, already there are 47 per cent of the population is food insecure.” Moreover, unusual climate conditions have favoured rapid locust reproduction. Marchesich said, “we are looking at monitoring, we are looking at the current assessment of the impact so far, monitoring the situation, providing support for control measures both aerial and ground as well as ensuring that the monitoring and the surveillance is continuing. But that is not enough, we also have to have anticipatory approaches to safeguard the livelihoods of the farmers and the agriculturalists.” The agency stressed that as favourable breeding conditions continue, the increase in locust swarms could last until June. And left unchecked, the numbers of crop-devouring insects could grow 500 fold by then. 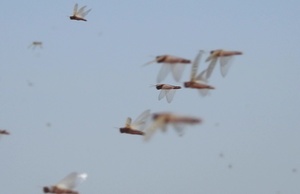